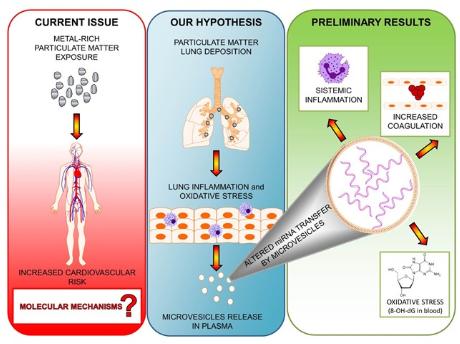 According to the WHO, diseases of the heart and cardiovascular system (CVD) are the largest single cause of death (accounting for about 2 million deaths) in the European Union and account for the largest number of premature deaths before 75 years of age. Numerous studies in human populations have shown acute and chronic particulate air pollution exposures to be associated with early death, particularly from CVD. In spite of more than two decades of mechanistic research, the recent statement of air pollution and cardiovascular disease from the American Heart Association remarked that at front of high degree of consistency of the epidemiology findings showing increased cardiovascular risk, the evidence on intermediate mechanisms remains moderate or weak.

An hypothesis is that ambient particles produce a strong inflammatory reaction in the lungs followed by the release of proinflammatory mediators that are able to reach the systemic circulation. Beside the release of proinflammatory mediators, cell-derived membrane vesicles (microvesicles, MVs) are also released, representing another mode of intercellular communication that has recently become the subject of increasing interest. MVs are spherical structures limited by a lipid bilayer that can be generated by cells and secreted into the extracellular space and released from cell membranes by different triggers, such as endotoxin encounter, hypoxia or oxidative stress conditions, cytokines release, thrombin production. It has been suggested that MVs, after internalization within target cells through surface-expressed ligands, may transfer microRNAs (miRNAs) enabling intercellular and inter-organ communication in the body . MVs might be the ideal candidate to mediate the effects of air pollution, since potentially they could be produced by the respiratory system, reach the systemic circulation and lead to the development of endothelial dysfunction.